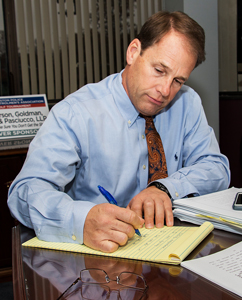 Ken joined the firm when it was called Finneran, Byrne, Drechsler & O’Brien back in 1998, and has remained with the firm through its various changes. Ken has extensive trial experience and has tried a wide variety of civil and criminal cases in all of the courts of the Commonwealth, as well as in the United States District Court for the District of Massachusetts. He has been involved in several hundred trials and has tried over one hundred jury trials to completion. He also has handled numerous cases defending police officers and other public employees in civil rights and excessive force claims in both courtrooms and in administrative settings. Ken frequently represents law enforcement officers in Internal Affairs investigations, in Anti-Corruption investigations, in local appointing authority termination/disciplinary hearings, and in appeals before the Massachusetts Civil Service Commission and labor arbitrators. Ken has also practiced before the Massachusetts Commission Against Discrimination, the State Ethics Commission, the Board of Bar Overseers, and before various local pension boards. Ken has extensive appellate experience, having argued before the Massachusetts Appeals Court, the Supreme Judicial Court, the First Circuit Court of Appeals, and the Appellate Division of the District Court, resulting in over twenty reported appellate decisions. He focuses his practice upon defense of public employees, private criminal defense, insurance defense, and has also represented plaintiffs in personal injury and medical malpractice trials.

He can be reached at This email address is being protected from spambots. You need JavaScript enabled to view it.

Ken is a former Suffolk County Assistant District Attorney (1992-1998), having worked in the Appellate Division (1992-1993), the District Court Division (1994-1995), and the Superior Court Division (1995-1998). While in the District Attorney’s office, Ken served on the Homicide Response Team, the Search Warrant Assistance Team, and was a lead arson prosecutor. He also worked as an instructor teaching legal updates and search and seizure for the Massachusetts Criminal Justice Training Council. Ken has appeared as an author in MCLE publications. Ken formerly coached youth soccer, hockey, and baseball. He is a former triathlete who ran the Boston Marathon twelve times. In his spare time Ken enjoys CrossFit, gardening, reading historical biographies, and competing in Spartan Races.